For this jam we were tasked with creating a game in 48 hours that dealt with a theme of "Back To School" and was limited to using only two buttons for the player controls. This meant we could only use two buttons for the player's entire interaction with game. The result is Gotta Get To Class, an infinite runner style game that use only the W and S keys on your keyboard. Go ahead and give it a shot, it plays great from inside your browser, no download or install necessary. Here's the link: 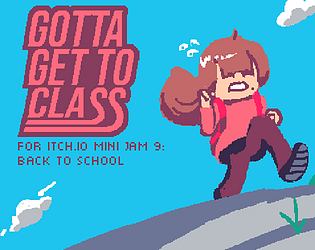 Play Gotta Get To Class on Itch.io

The game came in 5th overall and the music took 6th! We are well chuffed about that. I'm even more thankful considering we went through three different artists on this project. One bailed out silently having never completed any work, one set our color palette, designed the main character and then reported he felt sad and disappeared until the last day. At that point he insisted that he had done nothing for the project, and over my somewhat strenuous objections, demanded his name be taken off the project. So be it.

This game is also the debut of my freshly designed Chiptune Alternative Orchestra which I've been laboring over in Reason since Mini-Jam-8. I'm pleased to say that it's a sort of one stop shop for any project requiring that retro / chiptune vibe. It consists of a couple of 8-bit subtractive syths with all the lo-fi filtering and LFO bells and whistles to make for a somewhat realistic chiptune. Accompanying that is my beloved Farfisa patch, a subtractive bass synth and a lo-fi drum rig courtesy of a stock Reason preset. It's basically a "Band-in-a-Box" chiptune template that I'm nigh pleased with. If you're a Reason user who needs a quick Chiptune setup, drop me a line - it uses stock Reason 10 with no rack extensions or outside sources.

Back to Game Works